It’s not every day that Keith Carlock, Karl Brazil, Steve White, Eddy Thrower, Darrin Mooney and Adam Marko are together in the one house, but twas exactly the case for the 2016 Glasgow Drum Show. Rhythm Base and Drummers Only provided yet another all star cast to entertain Scotland’s Drum Community and none of these gentlemen disappointed!

Adam Marko opened the performance proceedings with a dazzling display of odd time proficiency and facility by showcasing his band, Special Providence. He played a selection of tracks that twisted even the most diligent of audience members’ brains, without ever being unmusical! Adam was playing a beautiful collection of Meinl Cymbals and Natal Bubinga shells and no part of his kit was left unturned, with all of it being used to the most musical effect.

He also did a day of teaching in Drummers Only on the day before and his students were left delighted with his ability to impart sound knowledge, technique and encouragement. A great start to the day.

Primal Scream’s Darrin Mooney was up second. He opened with a Primal Scream tune and followed quickly with an awesome drum solo, employing a variety of rudiments and Latin ostinato playing. An amazing technical facility on display. He answered questions with great humour and realism, highlighting how many of the rhythms that cross styles are all the same, and the inflection provided by the drummer is what gives them their personality!!

He closed his set with Primal Scream’s ‘Country Girl’ which is driven by a powerful tom beat, putting his Pearl Reference Pure through it’s paces, which, as expected sounded absolutely amazing! For me, the biggest surprise of the day. A phenomenal player!

After a quick turn around of the room and kits, it was Eddy Thrower’s turn to put on a show and he didn’t disappoint. His set consisted of a collection of well known pop tunes and songs from his band, Lower Than Atlantis’ catalogue. Eddy showed off great groove, power and musicianship for someone so young. His Tama Starclassic standing up to all he threw at it! He answered questions confidently and was a real gent, especially to the younger generation. Bravo Eddy.

Steve White followed on from Eddy and was his usual, awesome self. He was showcasing the new Yamaha Recording Custom series and the first set of new Zildjian Avedis to hit the UK. Without a doubt, Steve is one of the best players of his generation. He played with his usual impeccable groove, a blinding solo. On answer to a question, brought a snare drum to the front of the stage and displayed some outrageous snare drum technique, that he picked up courtesy of touring with pipe band legend Jim Kilpatrick.

Another quick turnaround brought the last two players of the day Karl Brazil and Keith Carlock.

Karl showcased the signature groove that gets him hired to play sessions all over the world and why. He played through a variety of tracks from Jason Mraz to Robbie Williams big band tunes and even an Irish/Scottish trad. tune that was completely out of the blue for the audience, who loved every second. He displayed an amazing energy for music and was rightfully positive for the whole time he played – always smiling, laughing and joking with the crowd. He showcased the new Gretsch Broadkaster range and the new Sabian Vanguard cymbals which saw them being debuted in the UK. A pleasure to watch and listen to.

Keith Carlock closed the show with a phenomenal display of chops and groove with a solo showing technique at the highest level. The level of facility he holds puts him up there with some of the greatest drummers on the planet and it’s a rare treat to get to see people of that calibre up close. He played with an amazing dynamic range, from barely audible to a tremendous roar and his Gretsch Brooklyn kit sounded massive, all throughout his playing. A great end to an amazing day of playing.

As with last year’s show, there was a tremendous amount of new gear on display. A few new and notable entries into the stock roster were the addition of both Liberty Drums and British Drum Co. 2 superb handmade British drum manufacturers, making amazing custom kits right here in the U.K.

Andrew from Liberty was on hand at his stall all day answering questions and guiding people through the intricacies of his drums, proving why they are award winning (Rhythm Magazine – Best snares in the world right now). He had a variety of kits and snares available for people to check – from their Bop series drums to Exotic snare drums. 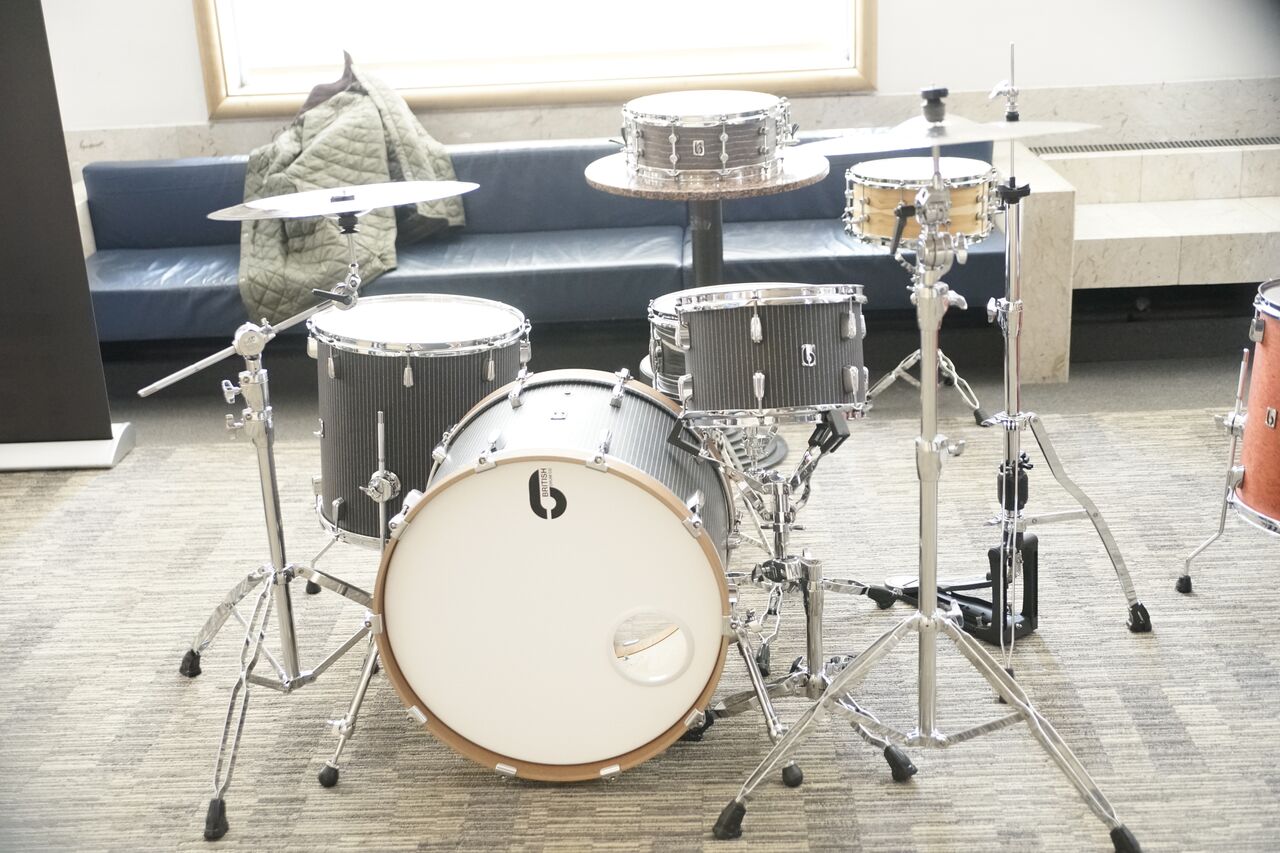 British Drum Co. also were on hand with their Legend and Lounge series drums available for people to check out in a variety of amazing finishes. Coupled with their Merlin snare range, there was plenty for people to indulge in for handmade, British drums.

To top off the display of British made kits, Natal brought with them a gorgeous UK made Originals kit in stunning Ebony/Maple. The kit features a thin 5.5mm 10ply one-off shell contruction of Ebony, Cherry, Walnut with 7plys of US Maple, 45 degree bearing edges, Brushed Nickel Hardware, 2.3mm hoops. The kit was designed specifically for the show and sounded amazing!

Gretsch were on display with the brand new Broadkaster range that was also used by Karl Brazil for his performance slot. The Broadkaster kit is a return to the vintage sound – based on their 1950s Broadkaster kits. The kit features a 3 ply shell, rounder bearing edge which allows greater surface contact with the head, resulting in a fatter, warmer tone. The famous Silver Sealer for the inside of the shell and the 302 double flanged hoops are also a great feature, rounding out the original design from the 50s. 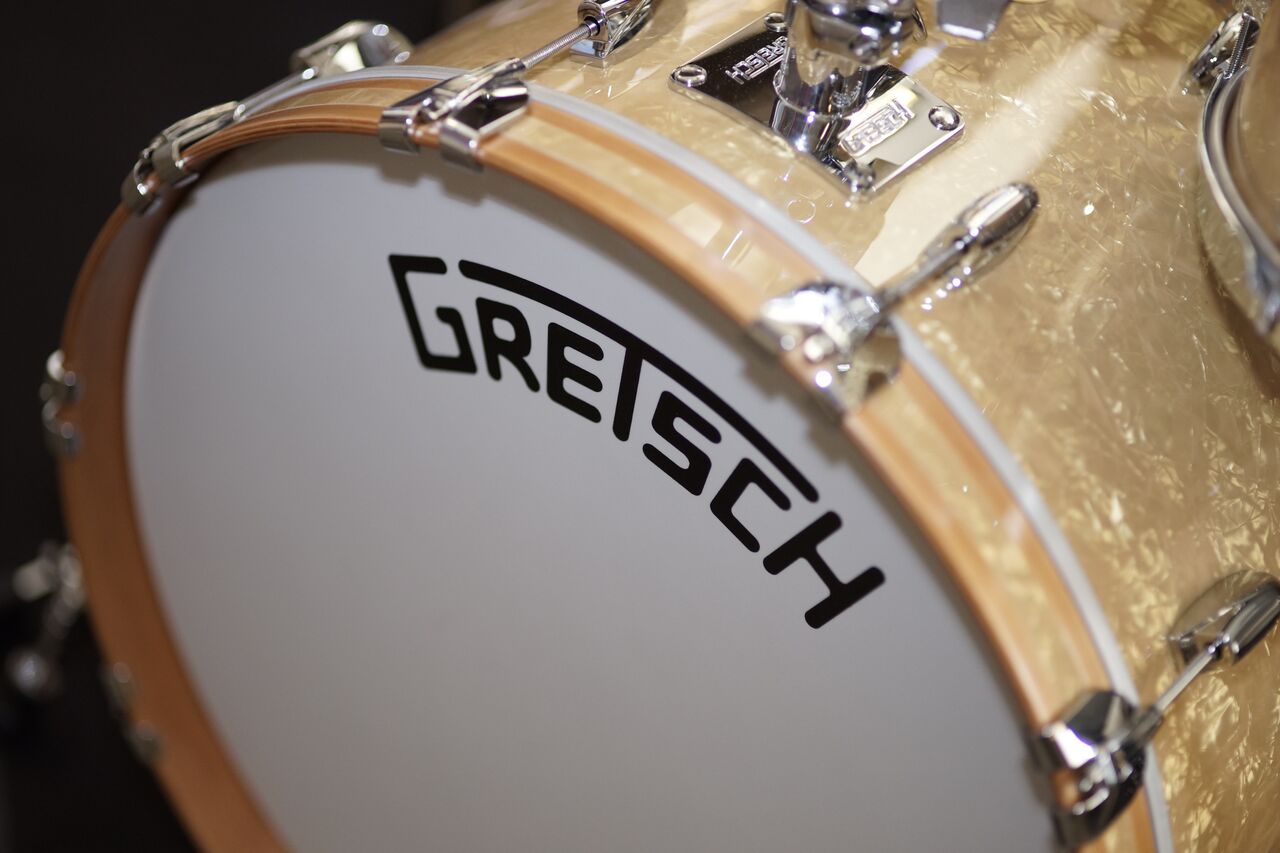 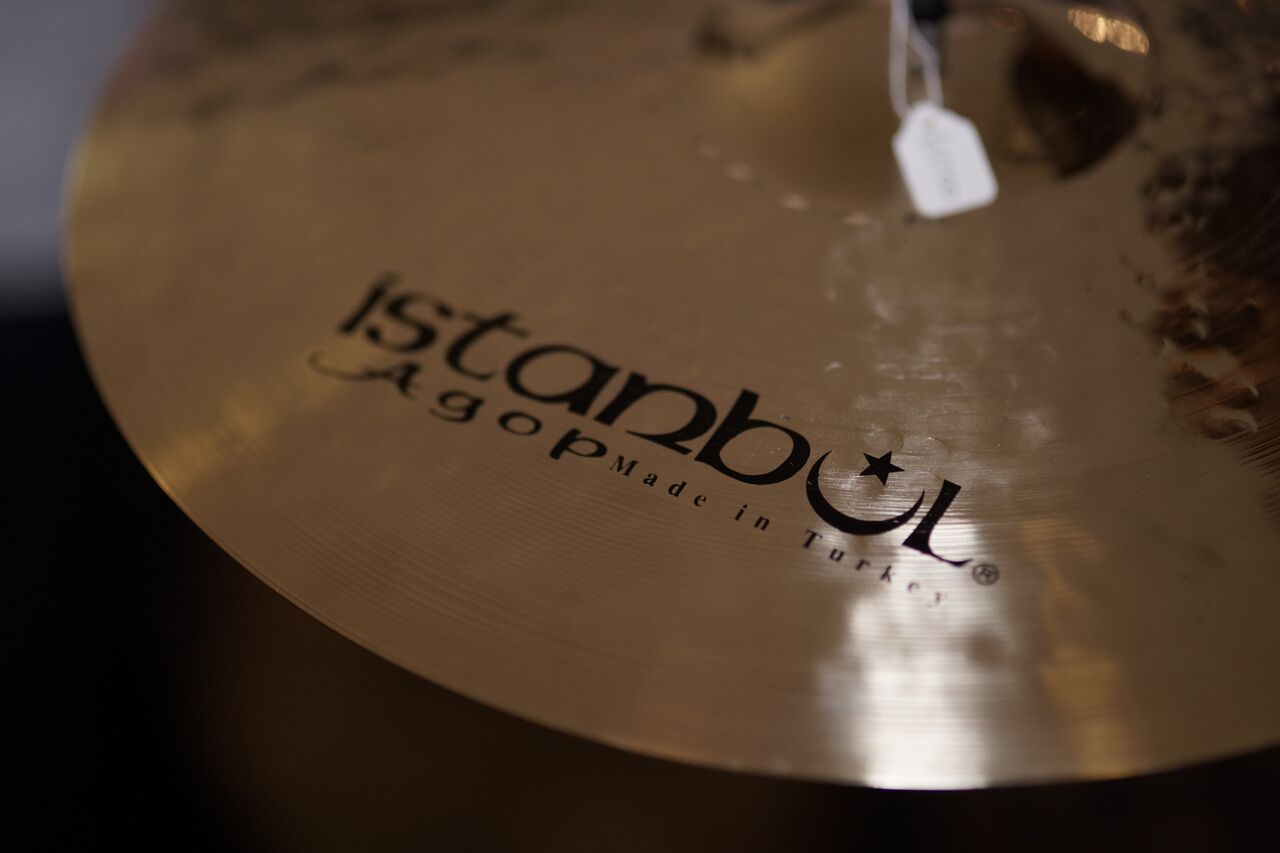 Other notable appearances were Istanbul Agop with newer models such as the 22″ Special Edition Fusion and 14″ Signature Joey Waronker hats.

Sabian turned up in style with the brand new Vanguard range. Vanguard sit in their ever popular Hand Hammered range, which has undergone a serious revamp in the last year. Like all HH cymbals, Vanguard models are fully hand hammered. But there are key differences. Vanguard cymbals employ pinpoint lathing, rather than traditional lathing. Also, Vanguard cymbals are thinner and lighter, with smaller bells and extended profiles overall. The result is clean, woody stick definition, providing exceptional articulation for such light cymbal.

Other notable inclusions on the Headstock stand were Schlagwerk cajons making their debut and the Zildjian S series line, which Zildjian consider to be “a versatile collection of bright and expressive cymbals built with a balanced frequency response, making it suitable for a variety of musical styles”

The Roland Electronic Cajon was also hanging around. A unique and versatile hybrid percussion instrument that combines an authentic acoustic cajon with Roland’s famous electronic percussion technology. It provided hybrid delight for everyone who tried it.

A fine display in all from all the distributors, contributing to a fantastic show. 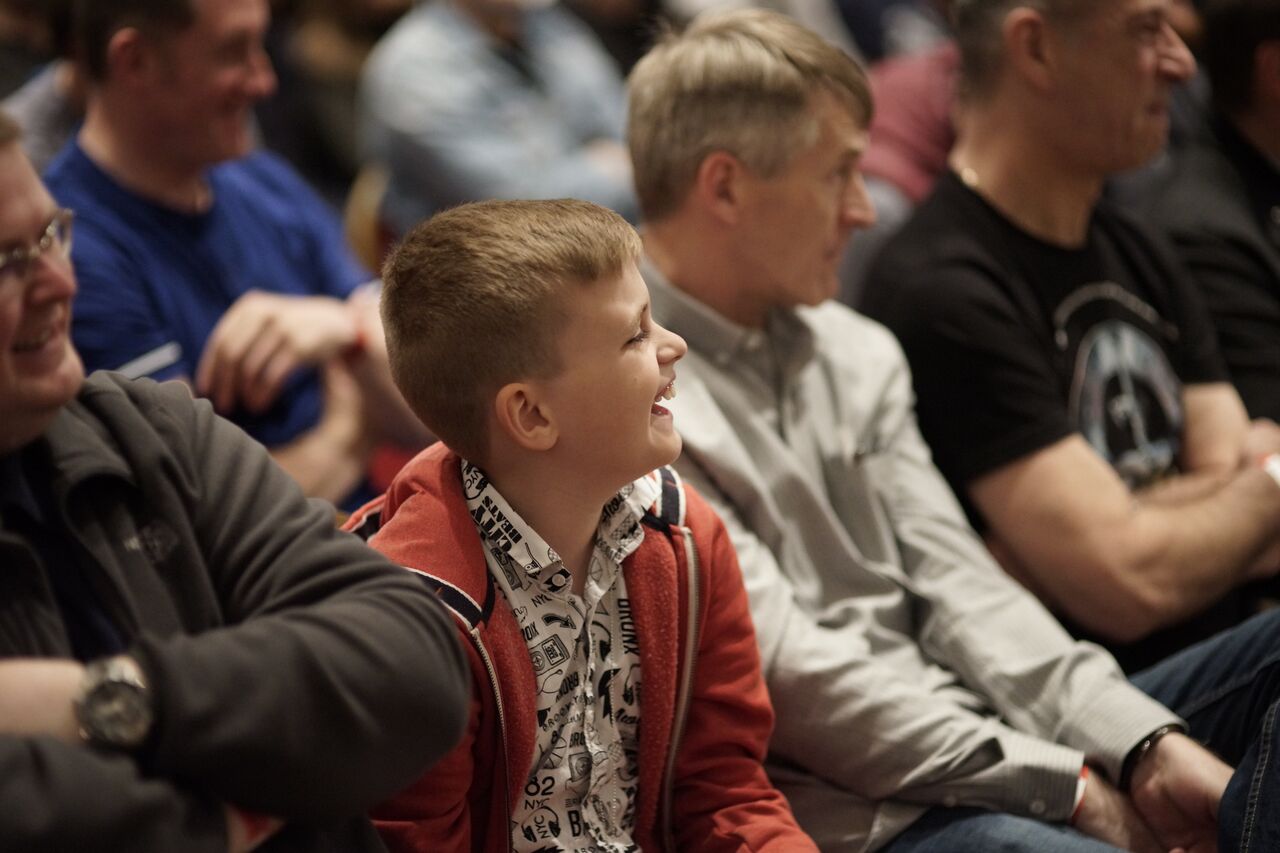 The attendance from the audience was massive, selling out the show. The response was overwhelmingly positive and it proves that drummers in Scotland are some of the most supportive and positive groups of musicians. The artists were on hand all day and dealt with questions and passionate fans with great enthusiasm, making it a huge triumph for both us and everyone in attendance. A thanks to all! 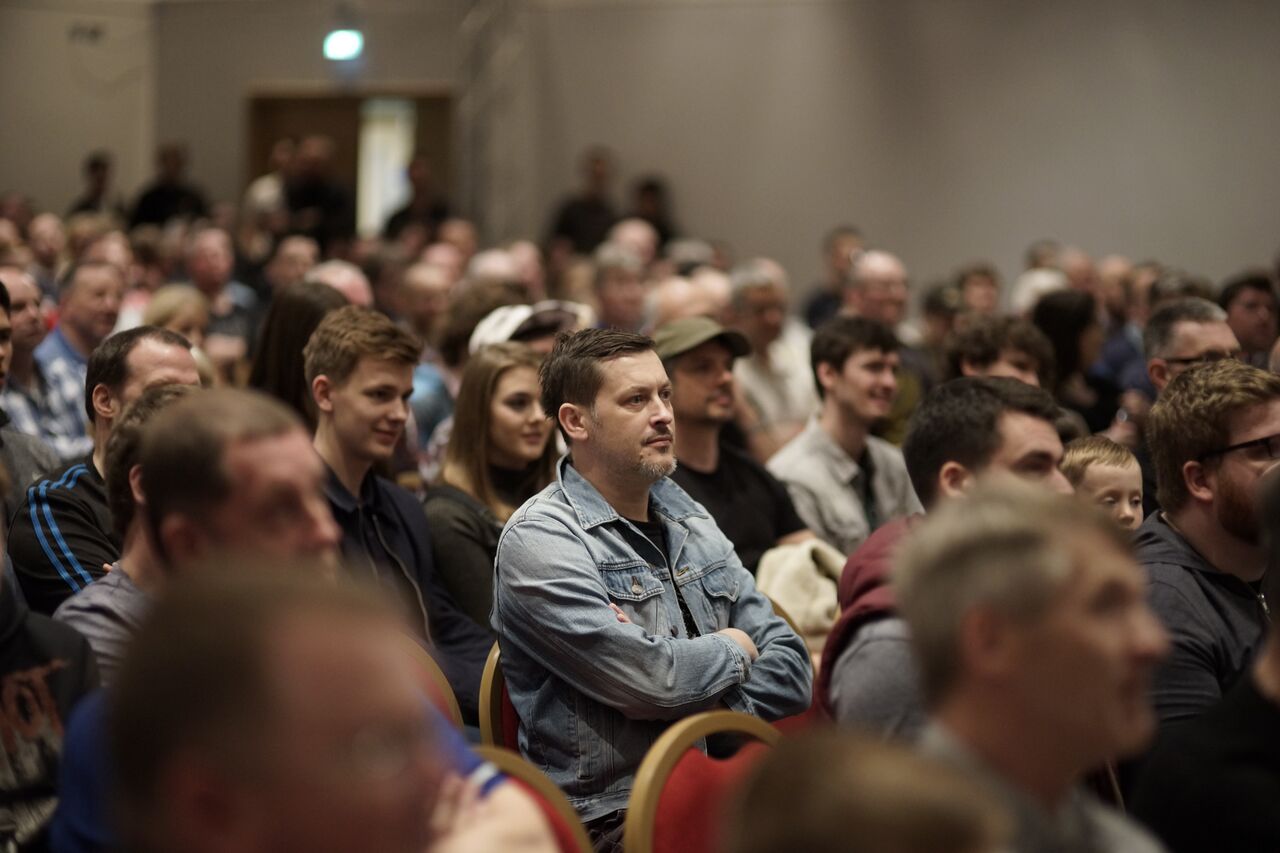